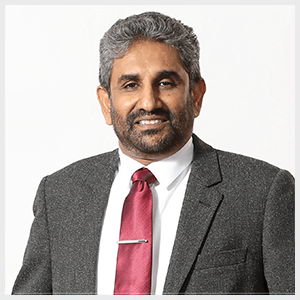 I consider it a great honour and privilege to be representing Bank of Ceylon (BOC), Sri Lanka’s premier bank, as the Chairman of APRACA for the biennium 2019-2020 upon assuming duties as Bank of Ceylon’s Acting General Manager/CEO. Echoing the words of my predecessor, I too would like to place on record my thanks and gratitude to all member institutions and partners of APRACA.

Since the words of my predecessor in office as Bank of Ceylon’s General Manager/CEO sums up the policies of Bank of Ceylon and its relationship with APRACA my message will be a re-confirmation of the sentiments expressed in that message. From it, I quote the following:

“BOC, though commercial bank, plays a wider role in acting as a catalyst for economic development. In this role it is engaged in poverty alleviation measures, development banking, financial inclusion and contributing to sustainability in both economic and social aspects. Serving all segments of Sri Lanka society and covering all geographical areas of Sri Lanka in the provision of modern financial services (including service modalities employing an increased quantum of technology) is an integral part of the overall task that Bank of Ceylon has undertaken in the role that it plays. Such service and coverage are in other words an integral part of its vision and mission. As such, Bank of Ceylon has taken active participation in the activities of APRACA since joining.

In a region that has grappled with elimination of poverty, financial inclusion and engaging rural and agricultural communities (which form a significant part of the region’s population) in meaningful economic activity the role played by APRACA has been significant. The platform it has provided since its formation in 1977 has been instrumental in sharing knowledge and learning, capacity-building, engaging in research, and exchanging expertise among member institutions. Apart from the support from member institutions and their enthusiasm, a key factor in APRACA’s rise to its present level has been the support it has received from the International Fund for Agricultural Development (IFAD). On behalf of all members of APRACA I acknowledge IFAD’s support with deep gratitude and the significant role IFAD’s support will continue to play as APRACA continues its journey.”

In my current role as the Chair of our Association I see myself continuing the work of my predecessors in the Chair which is the continuation of the implementation of the Strategic Plan of APRACA for the years 2019-2024. However, the unprecedented situation created by the COVID-19 pandemic may (and probably will) require modifications so as to stay timely and relevant.

I believe we are at an important point in our development. The knowledge and insights that APRACA members and partners have shared over the years have resulted in the development of expertise that will in turn out more and better insights and knowledge to make member institutions more effective and efficient. Now we are faced with a bigger challenge. I think I will not be wrong if I were to state that I cannot think of a more critical moment in APRACA’s history where such expertise and insights has be called upon to play a vital role in serving the rural and agricultural communities of member countries. The nature and depth of the damage to economies and social structures, especially its impact on rural and agricultural communities and associated supply chains and such like, resulting from the pandemic cannot be fully established.

As I bring my message to a close, I would like to place on record my sincere appreciation of all APRACA members and partners for the support they have provided. Their efforts and continued support have brought APRACA to the position it enjoys today. I expect to work closely with APRACA members and partners and look forward to their continued support and active contribution as we strive for implementation of APRACA Strategic Plan which must now grapple with the fallout of the COVID -19 Pandemic.