APRACA organizes its 62nd EXCOM Meeting in February 2013 in Thailand 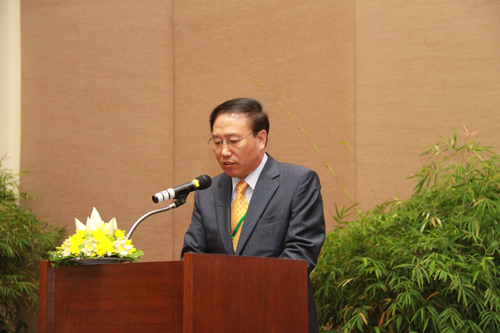 APRACA organizes its 62nd EXCOM Meeting in February 2013 in Thailand

APRACA and Bank for Agriculture and Agricultural Cooperatives (BAAC) of Thailand agreed to hold the 62nd Executive Committee meeting and its subsidiary events from February 25 to March 1, 2013 in Thailand. CEOs Open Forum on Agricultural Finance and the EXCOM meeting will be held on February 25 and February 26, respectively, in Bangkok, followed by a two-day field visit to Phuket Island in southern part of Thailand.
BAAC hosts the meetings and the field trip in commemoration of the moving of its head office to a new building. Invitation letters for the meeting with detail programs will be sent to the EXCOM member institutions soon.

APRACA is ready to move its Secretariat Office to BAAC building

In response to the request by the FAO Regional Office for Asia and the Pacific (FAO RAP) about the evacuation of the APRACA Secretariat office from its office building, the Secretariat has been working for the relocation of its Secretariat office.
The Secretariat decided to move its office to the BAAC building in downtown Bangkok and later obtained approval from APRACA Executive Committee by correspondence voting. Even though APRACA Secretariat moves to the BAAC building, FAO will continue to offer the same benefits that have been enjoyed by APRACA since its establishment in 1977.
The new address and telephone numbers will be circulated to the members and partner agencies upon relocation of the Secretariat in early October.

APRACA, commissioned by FAO Regional Office for Asia and the Pacific (FAO RAP), organized the Regional Policy Forum on Asian Livestock: Challenges, Opportunities and the Response. APRACA has collaborated with FAO RAP and another five institutions including Asia Pacific Association of Agricultural Research Institutes (APAARI), International Food Policy Research Institute (IFPRI), International Livestock Research Institute (ILRI), European Union (EU), and Animal Production and Health Commission for Asia and the Pacific (APHCA) for the successful organization of the Forum. FAO RAP, as the main sponsor, lead the Forum from the start to the end.
The Forum was held on August 16-17, 2012 at Royal Orchid Sheraton Hotel in Bangkok, Thailand with a total of 77 participants, 43 participants from 14 countries in Asia and 34 participants from 10 international institutions. Participants included government officials, officers of international organizations, professionals from universities and research institutions, and persons from livestock industries.
Increasing livestock production to meet rapidly growing demands in a socially equitable and ecologically sustainable manner has become major challenge for the Asia-Pacific region. The Forum aims to discuss these challenges and to outline elements of a response together with a wide range of stakeholders in livestock industries in the region.

APRACA, in collaboration with the co-organizers including FAO RAP, Agricultural and Food Marketing Association for Asia and the Pacific (AFMA), International Federation of Organic Agriculture Movement (IFOAM) and National Agricultural Cooperative Federation (NACF) Korea, has mostly completed the preparation of the Regional Symposium on Marketing and Finance of Organic Supply Chain.
The Symposium will be held at NACF HQs building, Seoul, Korea on September 23-26, 2012; one day field trip on September 23 followed by three-day sessions. A total of 26 speakers including a keynote speaker, 14 speakers in marketing sector and 11 speakers in finance sector will present their papers at the Symposium. A total of 62 participants (inclusive of 26 speakers) from 16 countries and 5 international institutions completed registration.

Strategic Plan of APRACA will soon be configured.

Sub-Committee meeting for the completion of the Strategic Plan (SP) of APRACA will be held on September 22, 2012 in Seoul, Korea in conjunction with the Regional Symposium on Marketing and Finance of Organic Supply Chain.
The Committee aims to finalize the draft of the Strategic Plan through the discussion based on the draft prepared by the Agricultural Credit Policy Council of the Philippines. The Strategic Plan will be finally adopted by the resolution of, the 62nd EXCOM meeting of APRACA in February, 2013 and the following General Assembly.