APRACA’s 19th General Assembly has been a great success 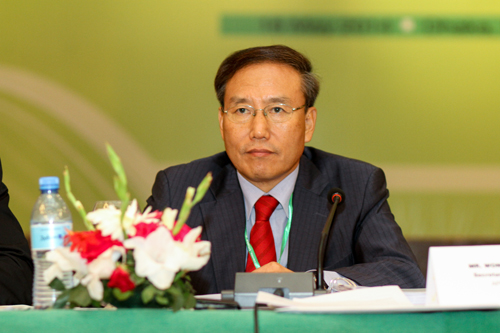 APRACA held its 19th General Assembly and other meetings on 18-21 May 2014 at Radisson Blu Water Garden Hotel in Dhaka, Bangladesh with the participation of over 100 delegates from 38 member institutions of APRACA and nine delegates from Africa Rural and Agricultural Credit Association (AFRACA) members.

At the Grand Opening of the General Assembly and other meetings on 19 May, Mr. S. K. Sur Chowdhury, Deputy Governor of Bangladesh Bank welcomed all the participants, indicating that APRACA currently consisted of 68 members across 21 countries. In succession, Mr. Kim Vada, APRACA Chairman delivered his opening address, taking note of APRACA’s remarkable membership growth that illustrated the importance of APRACA in the region.   In his message, Dr. Atiur Rahman, Governor of Bangladesh Bank, commended APRACA’s role in fostering the development of the rural and agriculture credit in the region.  Delivering vote of thanks, Mr. Won-Sik Noh, Secretary General of APRACA expressed his deep gratitude to all the member institutions for their continuous support to APRACA.  He also expressed his sincere appreciation to Bangladesh Bank for successfully organizing the 19th General Assembly in Dhaka.

During the Grand Opening, APRACA Chairman and Secretary General jointly awarded the Certificates of APRACA Membership to the 17 new members of APRACA including, among others, BRAC Bangladesh that joined APRACA since the 18th General Assembly in 2012.

The General Assembly starting at 2 pm on 19 May reviewed a total of 11 agenda items.  Several resolutions were adopted.  These included, among others, APRACA Biennial Work Plan and Budget for 2015-2015, and the Amendments to the APRACA Regulations. The General Assembly elected Bangladesh Bank and Nepal Rastra Banks as the APRACA Chairman and Vice-Chairman respectively. The Assembly also elected Agro-Bank Malaysia and BRACA Bangladesh as APRACA Executive Committee Members in addition to the existing 13 Ordinary Executive Committee Members. The delegates of the Assembly also appointed Mr. Chamnong Siriwangyotha, Assistant Vice-President of Bank for Agriculture and Agricultural Cooperatives (BAAC) of Thailand as the new Secretary General of APRACA whose term of office commenced on 1 July 2014.

The 64th APRACA Executive Committee Meeting held on 18 May reviewed and adopted a total of 14 agenda items for the submission to the General Assembly on the following day. Noteworthy was the fact that the Committee adopted APRACA Secretariat Reform Program that was scheduled for implementation within the next two years.  The Committee also accepted membership applications to APRACA from the rural and agricultural finance institutions in the region including Bank Jateng Indonesia, ASKI Philippines, and Sana Kisan Bikas Bank Nepal. Earlier in the morning session, the Committee interviewed three candidates shortlisted for the post of APRACA Secretary General and nominated Mr. Chamnong Siriwangyotha, Assistant Vice-President of BAAC, Thailand, as the top candidate for the post for the General Assembly’s approval.

After the adjournment of the General Assembly, APRACA-IFAD FinServAccess Project Regional Policy Forum was held on Risk Management for Smallholder Farmers and Communities on 20 May.  This was followed by a field visit to an agricultural finance project in Bangladesh, which took place on 21 May.