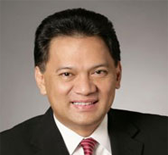 Bank Indonesia (Central Bank of Indonesia) has recently elected MR. AGUS MARTOWARDJOJO as the new Governor, replacing MR. DARMIN NASUTION who had completed his term on 22 May 2013.

Mr. Agus Martowardjojo graduated from the University of Indonesia in 1984 and continued his study in the field of banking business in the State
University of New York and Stanford University in the United States. He began his working career in Singapore with the Institute of Banking &
Finance.