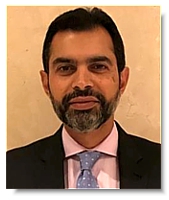 Dr. Reza Baqir was appointed as the Governor SBP by the President of Pakistan on May 04, 2019 for a period of 3 years from the day he assumes the office of the Governor. He assumed his responsibilities on May 05, 2019.

Dr. Reza Baqir has eighteen years of experience with the IMF and two years with the world Bank. He was the Head of the IMF’s Office in Egypt and Senior Resident Representative since August 2017. He has also held positions as IMF Mission Chief for Romania and Bulgaria, Division Chief of the IMF’s Debt Policy Division, Head of the IMF delegation to the Paris Club, Deputy Division Chief of the IMF’s Emerging Markets Division, IMF Resident Representative to the Philippines, and numerous other positions.