Mr. Yaseen Anwar was appointed by the President of Pakistan as Governor of State Bank of Pakistan 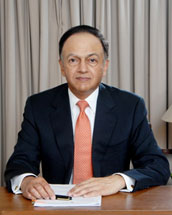 Mr. Yaseen Anwar was appointed by the President of Pakistan as Governor, State Bank of Pakistan for a period of three years

Mr. Anwar has served the State Bank as its Deputy Governor since 29th March 2007, and managed all the four clusters of the Central Bank i.e. Banking, Reserve Management, Monetary Policy, and Operations: SBP subsidiaries Banking Services Corporation (BSC) and the National Institute of Banking and Finance (NIBAF).

Mr. Anwar has served on the Boards of SBP, Pakistan Security Printing Corp. (PSPC), Policy GBOARD of SECP, Board of NIBAF and SAARC Payments Council Board, He is a member of Monetary Policy Committee (MPC) of SBP Central Board and has interacted with the IMF under the Standby Arrangement with Pakistan. He has also served as an alternate to the Governor on the Asian Clearing Union (ACU) Board.

As a senior global banker, Mr. Anwar brought 33 years of international banking experience to SBP. During this period, he worked at major international financial centers that included New York, London and Paris with JP Morgan Chase, Bank of America and Merrill Lynch. As a result of this international exposure, he developed a deep understanding of corporate business relationships in U.S., Europe and the Middle East as well as a broad range of hands-on experience in managing rapidly growing business units of renowned global financial institutions with detailed knowledge and overnight of the Regulatory Environment, Capital Markets, Operations, Payments, Export Finance, Investment Management and Credit related matters.

He was trained at JPMorgan Chase, New York During 1973-1975 after completing his Bachelor of Science degree in Economics from the Wharton School of Business at the University of Pennsylvania where he received a dual degree of BA in Political Science as well. His early education included attending Aitcheson College (Lahore), Grammar School (Karachi) and Karachi American School.