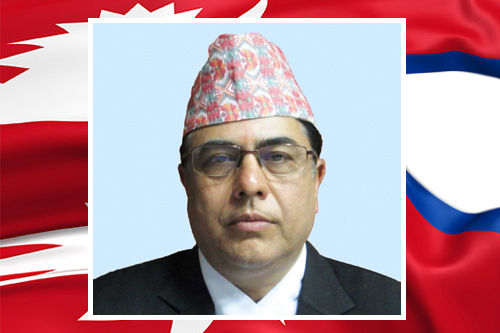 Dr. Chiranjibi Nepal is the Governor of the Nepal Rastra Bank, the Central Bank of Federal Democratic Republic of Nepal;

Dr. Chiranjibi Nepal is the Governor of the Nepal Rastra Bank, the Central Bank of Federal Democratic Republic of Nepal; he was appointed on 19th March 2015.

Prior to appointment as Governor, Dr. Nepal served as an Economic Advisor to the Rt. Honorable Prime Minister of Nepal from February 2014 to March 2015; he was Chief Economic Advisor of Government of Nepal’s (GON) Ministry of Finance from June 2013 to November 2013; from 2009‐2010 he served as an advisor to Deputy Prime Minister & Minister for Foreign Affairs of GON; and from August 2007 to November 2008 he was appointed as Executive Chairman of the Securities Board of Nepal among others.

In addition to his wide experiences with different government bodies of GON he has also experience with the private sector institutions and academia. He was involved with diverse institutions in the private sector in different capacities such as being Senior Consultant and Advisor to Federation of Nepalese Chambers, Commerce and Industry; was an international consultant to German Technical Cooperation and advisor to UNESCAP in Thailand. He has also continued his involvement with academia reflected in him being Visiting Professor of Kathmandu University, Nepal; a Senior Research Advisor to the Samriddhi Foundation, Nepal and was an Assistant Professor at Tribhuvan University, Nepal. He is also presently Vice President of Nepal Economics Association, Kathmandu the post he has held from July 2014.