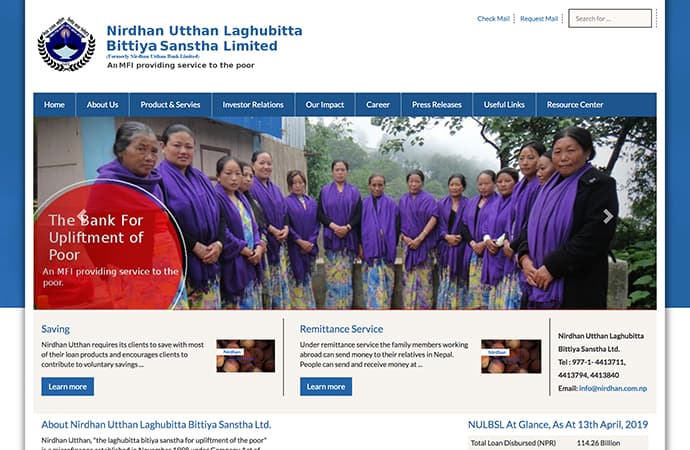 NULBSL’s mission is to extend financial services and social awareness to the poor in underserved and unserved areas of Nepal in a sustainable manner. Nirdhan was founded on March 31, 1991 by Late Dr. Harihar Dev Pant (the pioneer of microcredit movement in Nepal), who served as the institute’s Chief Executive until August, 2015. Microfinance program of the institute started on March 14, 1993 when it was working as NGO, later transferred to Microfinance Bank in 1998. Nirdhan was the first NGO to transfer its microfinance portfolio into an autonomous microfinance Institution in Nepal.

Nirdhan Utthan’s landing methodologies are (a) individual lending based on group solidarity and without collateral (Grameen Banking Model. (b) Wholesale lending to Self Reliant Group, and (c) Collateral based lending for micro entrepreneurs.

At present, Nirdhan Utthan has outreach in all 77of 77 districts of Nepal through the network of 181 Branch Offices, 10 Regional Offices and a Central Office serving 344,180 households as of Mid-March 2019.