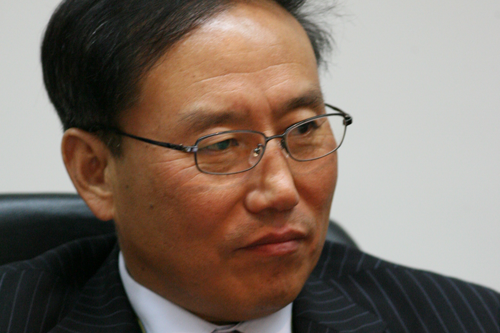 Secretary General Report APRACA Executive Committee Meeting and two Forums completed successfully The 60th APRACA Executive Committee meeting and two Open Forums have successfully been held on June 13-14 in Tehran by the host of Bank Keshavarzi(BK), Iran with the attendance of a total of 230 delegates including 44 foreign participants from 14 countries .

The 60th APRACA Executive Committee meeting and two Open Forums have successfully been held on June 13-14 in Tehran by the host of Bank Keshavarzi(BK), Iran with the attendance of a total of 230 delegates including 44 foreign participants from 14 countries .

The Joint Opening Ceremony was held at 8:30 A.M. on June 13 at the IRIB International Conference Center, starting with the Welcoming Remarks by Dr. Mohammad Talebi, Chairman and Managing Director of BK, followed by an Opening Statement by Ms. Jovita Corpuz, Executive Director of Agricultural Credit Policy Council, the Philippines and President of APRACA CENTRAB (representing APRACA member delegates).

Dr. Sung-Hoon Kim, the former Agricultural Minister of Korea, currently Professor Emeritus of Chung-Ang University, delivered a keynote speech on the title of ‘The Role of Rural and Agricultural Finance in Counter-Measuring Climate Change’.

The Asian Open Forum on Rural and Agricultural Finance in Asia and the Pacific followed the Opening. It had one special session for CEOs and invited speakers followed by two open sessions with the topics of ‘New efficient Approaches and Schemes to cope with Natural Disasters’ and ‘Major Policies encouraging/promoting Agricultural Investment to confront Environmental Changes’. A total of nine speakers presented their views on the topics. The papers presented are attached separately on this APRACA website. In the middle of the Forum, the Minister of Finance and Economic Affairs of Iran kindly gave a speech on Economic Policy and Development of Iran.

IFAD-APRACA FinPower CEO Policy Forum was held on June 14 with Opening Remarks by APRACA Secretary General. Ms. Jocelyn Alma M. Badiola, Executive Director of the Congressional Oversight Committee on Agriculture of the Senate of the Philippines then presented a regional study on Microfinance Policy Environment and Regulatory Framework of selected Countries in Asia and three speakers, one each from Iran, Cambodia and India, introduced their country case reports.

The 60th APRACA Executive Committee meeting was convened after the CEO Policy Forum with the participation of 13 Committee members and some observers from APRACA member institutions. H.E. Pal Buy Bonnang, APRACA Vice-Chairman and Assistant Governor, National Bank of Cambodia, chaired the meeting which passed the nine items of the Agenda including the Preliminary Draft of the Biennium Work Plan and Budget 2013-2014. ASA, one of the leading microfinance institutions in Bangladesh became the 60th APRACA member by the approval of the Executive Committee. A Plaque of Appreciation was awarded to Dr. Talebi, Chairman of BK, for his support to APRACA as well as excellent arrangement for the meetings.

Each of the two days of meetings were followed by splendid Gala Dinners and then by a two-day excursion visit to Isfahan, one of the most famous historic and cultural cities in Iran, located about 500 Kms south of Tehran.