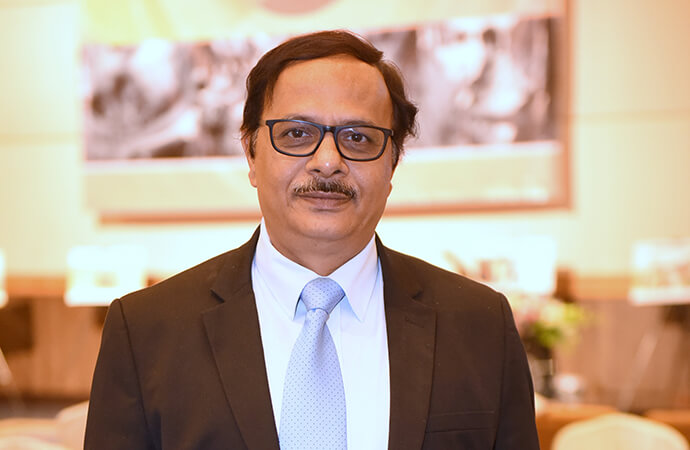 APRACA Secretary General joined the 3rd steering committee meeting for organizing the 6th World Congress was convened by NABARD (host organization) which was held in their New Delhi Regional Office, during 2-3 July 2019. The meeting was attended by the representatives from MCID, NABARD Head Quarters and New Delhi Regional Office, Chairman of APRACA, Secretary Generals of APRACA, AFRACA and CICA. The representative of BAAC and ALIDE joined the meeting through skype.

The Banking, Finance and Insurance Institute of Nepal (BFIN) in collaboration with APRACA, Bangkok conducted a five-days training programme on ‘Leadership Development’ during 8-12 July 2019 in Bangkok, Thailand. This programme was targeted for exclusively for the officials of the Employees Provident Fund (EPF) and other officials from the Banks and Financial Institutions involved in managing provident funds. APRACA Secretary General took a special session on leadership and team building for this group of trainees.

APRACA Secretary General joined the International Fund for Agricultural Development (IFAD) organized 2nd Mekong Hub Knowledge and Learning Fair (MKLF) 2019 which was held in Bangkok during 10-11 July 2019. During MKLF 2019, more than 150 delegates from IFAD supported loan and grant projects in the IFAD Mekong Hub, government, private sector, and farmer representatives from Thailand, Vietnam, Philippines, Cambodia, Myanmar and Lao PDR actively participated to make it a successful event. APRACA and Bank for Agriculture and Agricultural Cooperatives (BAAC) jointly set up a booth during the MKLF 2019 to showcase the products and services of BAAC and knowledge products of APRACA. APRACA Secretary General described about the pillars of the work and knowledge products of APRACA.

There are three delegates from the Embassy of the Czech Republic in Thailand visited APRACA Secretariat and met Secretary General to discuss on future collaborations in the areas of agricultural development. Mr. Pavel Kucera, Chief Communication Officer of the Big Terra Alpha Company from Czech Republic led the team and was attended by Mr. Jessada Khawsithiwong. The purpose of the meeting was to present the initial project for Climate Report and Analytical Platform for Agriculture in Asia.

The Secretary General of APRACA delivered a presentation on APRACA’s role in this cooperation initiatives during the meeting of the delegates from Bengal National Chamber of Commerce and Industries (BNCCI) from Kolkata, India who visited Bangkok to meet the Thailand Business houses to bring long term cooperation with Thailand with special emphasis on tourism, food processing and education sector. During his delivery, he insisted that the look east policy of Government of India and look west policy of the Thailand government provides enough opportunity to enhance the cooperation and the financial institutions in both the countries can support these initiatives.

APRACA Secretary General was invited to deliver a lecture in the forum on ‘Reducing Disaster Risks Towards a Resilient Agricultural Sector’ meeting with ASEAN member countries organized by the SEARCA and French Embassy of the Philippines held in Manila on 28-30 August 2019. He spoke on the services that could be provided by APRACA to the member countries in the region and the countries can be benefitted from the services of APRACA.

Dr. Prasun Kumar Das was invited by the UNFCCC to join the Asia-Pacific Climate week held in UNESCAP, Bangkok during 2-6 September 2019. The Secretary General joined the high-level plenary session on ‘Nationally Determined Contribution (NDC) Implementation: Raising Ambition’. This high-level session brought together high-level government officials with representatives of non-Party stakeholders to create an enabling environment and promote investment in fast tracked implementation of NDC in the region.

APRACA Secretary General inaugurated the APRACA-BFIN joint training programme on ‘Leadership Development for Financial Institutions in Nepal’ held in Bangkok during 23-27 September 2019. The officials also gained exposure to the practical situations in Siam Commercial Bank (largest bank in Thailand) on the data security, cybercrime and protection in practical banking operations.