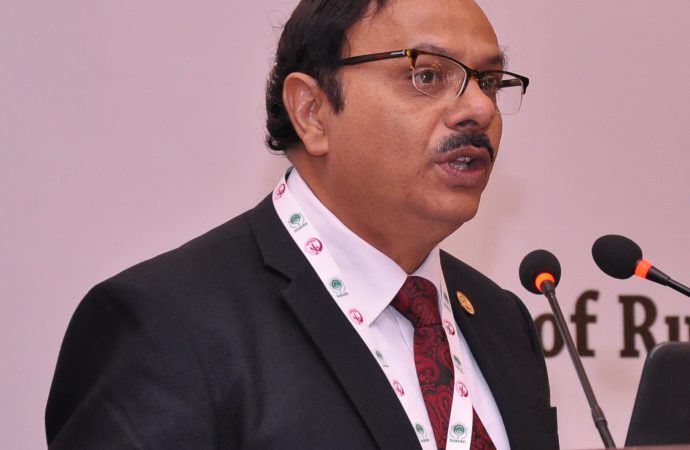 International Development Research Centre (IDRC), Canada invited the Secretary General of APRACA to discuss future engagement with this regional Association and its member financial institutions to build their capacities in the areas of rural and agriculture finance. The overarching objective of this meeting was to support the Sustainable Development Goals of the United Nations International Development Research Centre (IDRC), Canada invited the Secretary General of APRACA to discuss future engagement with this regional Association and its member financial institutions to build their capacities in the areas of rural and agriculture finance. The overarching objective of this meeting was to support the Sustainable Development Goals of the United Nations through collaborative research and capacity building activities in the least developed countries of the region. The meeting was held in the office of the IDRC, Ottawa, Canada on 20 October 2018. APRACA Secretary General was invited by the Confédération Internationale du Crédit Agricole (CICA) to speak on the conference on ‘Agriculture and Climate Change’ held during 23-25 October in Quebec City, Canada. APRACA Secretary General was one of the panelists in the session on ‘Adaption to climate change: the role of banks and insurance companies’ along with CEOs and Heads of the Banks and Insurance Companies. The Secretary General of APRACA attended 2 meetings organized by the Managing Director of APRACA-CENTRAB, one with the Staff members of APRACA-CENTRAB on 9 November and with the Philippines based member institutions of APRACA on 10 November 2017. The progress till October 2017 presented by APRACA-CENTRAB was impressive which reflected their efficient operation and it was expected that this year they will surpass the target of number of activities. There were 6 member institutions present in the meeting which was hosted and chaired by the Executive Director of ACPC and there were 5 more member institutions were present. The Secretary General presented APRACA and its operation during the year in review and requested the members to support APRACA so that it could reach the target set by the EXCOM members during its last meeting held in Beijing. The members present were enthusiastic to the fact that APRACA is celebrating 40 years of its existence in the region and expressed their satisfaction.

The Asian Development Bank (ADB) in partnership with Asian Development Bank Institute, Bill & Melinda Gates Foundation, Alliance for Financial Inclusion (AFI), Consultative Group to Assist the Poor (CGAP) and the Government of Luxembourg organized the 2nd Asia Finance Forum on ‘FinTech and Sustainable Development’ which was held during 8-10 November 2017 at ADB Headquarters in Manila. The conference brought together around 200 policy makers, financial sector regulators, financial institutions, financial technology (FinTech) companies, academia, as well as financial sector experts who discussed the growing importance of FinTech in shaping the financial system of the new economy including logistics infrastructure, payment systems, financial services, cloud computing and data collection. APRACA Secretary General was invited as a Panelist in the Session on ‘Financing agriculture value chains in the digital age’. In his presentation Dr. Prasun Kumar Das flagged that FinTech alone is not a solution to improve efficiency of delivery of financial services but adding AgriTech with FinTech has more potential to improve the income of the smallholder farmers in the Asia-Pacific region.

APARACA Secretary General was invited by the State Bank of Pakistan to conduct a 2 day training programme in 2 locations Karachi and Islamabad) on value chain finance. This was a refresher training programme specially designed for the Pakistani Bankers. This course on Agricultural Value Chain Finance (AgVCF) is targeted for the trainers who were already trained during the international training of trainers (ToT) programme organized jointly by State Bank of Pakistan and FAO during April and May 2015 in Karachi and Islamabad. The ToT conducted during 2015 aimed to provide trainees with the general

understanding of agricultural value chain finance (AgVCF) and its application in the banking sector across the globe with particular reference to the Asian continent. As decided by the State Bank of Pakistan the ToT was conducted for 2 days in both the locations (Karachi: 20-21 November and Islamabad: 23-24 November, 2017) for the trainers already trained in this subject so that they enhance their skills and ability to train the credit officers and other related personnel to promote agriculture value chain finance in the county.

APRACA celebrated 40 years of its service to develop rural and agricultural credit in the Asia-Pacific region. This historic event was held in New Delhi, India on 16 December 2017 in conjunction with the 69th Executive Committee meeting of APRACA and international Forum on ‘Role of Rural and Agricultural Finance on Sustainable Development Goals’. APRACA was established by the Food and Agriculture Organization of the United Nations (FAO) in 1977 during the Asian Conference on Agricultural Credit and Cooperatives held in New Delhi, India. APRACA and National Bank for Agriculture and Rural Development (NABARD), India jointly organized one international forum on ‘Role of Rural and Agricultural Finance to Achieve Sustainable Development Goals’ in conjunction with the 69th Executive Committee meeting (EXCOM) of APRACA. This international forum was also held to mark 40 years of distinguished services of APRACA to develop rural and agriculture finance in the Asia-Pacific region. The international forum was inaugurated by Mr. Arun Jaitley, Honourable Finance Minister of Government of India. According to Mr. Jaitley, one of the solutions to achieve the SDG is to double the income of the farmers in the developing countries like India. He commended the role played by the APRACA member institutions in the Asia-Pacific region with special reference to India to achieve MDG targets and expected that they will stand tall and achieve the targets well in time in this occasion too.

The 69th APRACA Executive Committee (EXCOM) meeting was convened at the Shangri La’s Eros Hotel, New Delhi, India on 17 December, 2017. The meeting was attended by delegates from 12 EXCOM member institutions of APRACA and Dr. Prasun Kumar Das, Secretary General of APRACA as Ex-Officio Member. The meeting was also attended by 25 observers from APRACA member institutions, staff members of the APRACA General Secretariat and Managing Director, APRACA-CENTRAB. The Secretary Generals from African Rural and Agricultural Credit Association (AFRACA) from Nairobi, Kenya and Confédération Internationale du Crédit Agricole (CICA) from Switzerland were also present in the meeting as observers.