The Value Chain Financing in the Philippine : A Farmers’ Journey with rural finance institutions (RFIs) 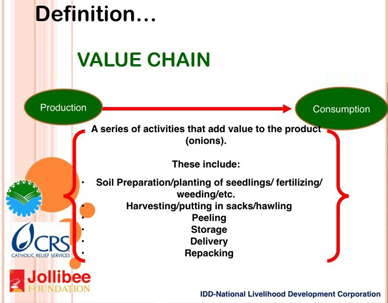 In spite of economic growth in other sectors, the Philippines remains an agricultural economy with around 40% of its land area devoted to agriculture.

A. The Philippines as an Agricultural Country

In spite of economic growth in other sectors, the Philippines remains an agricultural economy with around 40% of its land area devoted to agriculture. This translates to a 13.04% contribution to the country’s gross domestic product/GDP (WorldBank Report, 2012). In the first quarter of 2013, the sector grew by 3.3% as all the subsectors— crops, fishery, poultry and livestock— posted respective increases reaching Php352.5 billion at current prices (Sec. Alcala, D.A. Website). The major crops being produced are rice, corn, coconut, and recently, the sector has just strengthened its campaign to venture into high value crops even for small landholders.

Around 33% of the country’s labor force, who are mostly in the rural areas, rely on agriculture as a source of livelihood. These areas are scattered in major islands of Luzon, Visayas and Mindanao and are further dispersed into several island provinces and municipalities. The country is frequently visited by an average of 20 typhoons a year and floods during rainy seasons. The climate change has caused unpredictability of weather which brings worse disturbances in the provinces which were safe back then. These natural calamities, therefore, bolster a higher risk in agriculture posing a serious threat not just to inpidual farmers but to the entire economy as well.

On the government support to agriculture, there has been a more vibrant initiatives with involvement of various key government departments (e.g., Department of Agriculture, Department of Agrarian Reform and Department of Environment and Natural Resources) and state-owned corporations (e.g., Land Bank of the Philippines, National Livelihood Development Corporation, Philippine Crop Insurance Corporation, etc.) in providing assistance. From the financing standpoint, that trend is shown by the substantial increase in agricultural loan portfolio from Php41 billion in 1990 to Php231.8 billion in 2011 (ACPC, 2012).